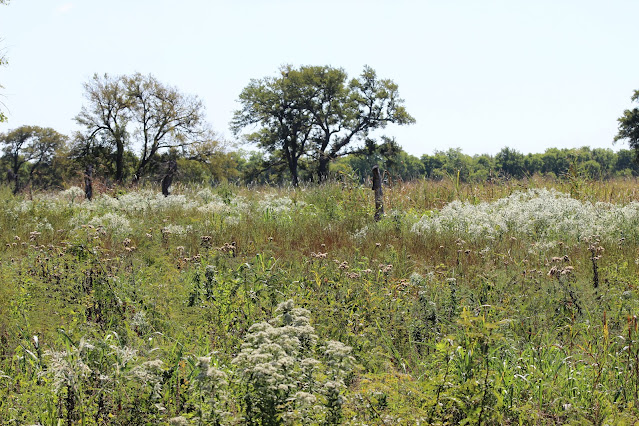 T E X A S The jolly pilot announces we’re currently flying over Paris, Texas and should be landing in Dallas soon.   Looking north, I spot the Red River – a dividing line between Texas and Oklahoma.   Now oriented, I search for the two main destinations of this Texas trip – Clymer Meadow and Lennox Woods.   But from high above, I can’t differentiate features within the homogenous flatness, and it makes me question why I chose to add two Nature Conservancy (TNC) properties in east Texas to my collection.   Usually, TNC sites look very dynamic from the air.   But Clymer and Lennox apparently lie hidden in the flatness.   Though I can’t identify specifics, what is apparent is a change in the landscape occurring near Paris.   Ever since leaving Washington, DC, our flight has crossed mostly a forested landscape, but at Paris, trees give way to prairies.   And it’s these adjoining landscapes I’ll be visiting, both of which reveal Texas as it was before westward population expansion.   C
Post a Comment
Read more 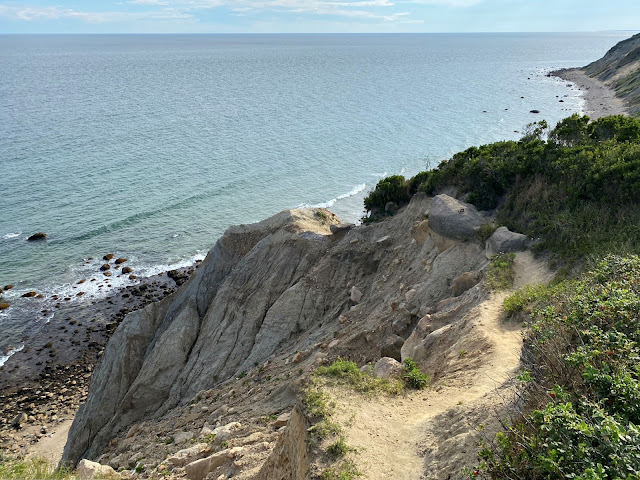 B L O C K  I S L A N D,  R I Second Bluff, Block Island, Rhode Island The sandy path I’m following ends at the end of an era.  Fifteen thousand years ago, this path would have been underneath a glacier, but when the Ice Age ended and that glacier retreated, it left behind piles of ground up conglomerate forming a string of well-known east coast islands including Nantucket, Long Island, and where I’m walking: Block Island, Rhode Island. This path terminates at a bluff high above the Atlantic on top of that sand pile left behind by the Ice Age.  It’s a pile at war with the sea.  Incoming waves have been chewing away at the conglomerate for eons creating Block Island’s iconic Mohegan Bluffs.   To the east of where I stand is the more popular access to Mohegan Bluffs, complete with parking lot, kiosk, placards, safety railings, and a long staircase leading the base where those chewy waves are at work.  But the path I’m on is off that beaten path – a much lesser known one that most others
2 comments
Read more 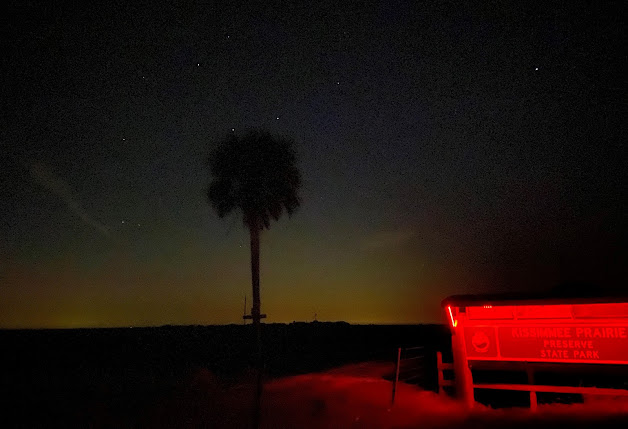 F L O R I D A     Kissimmee Prairie (87) Okeechobee, Florida Vast & Humbling   I exit Florida’s Turnpike at Yeehaw Junction and drive into a dense darkness.   I’m a lone traveler on a now-thinner road no longer surrounded by the highway’s luminance.   Suddenly my headlights seem quite feeble.   The feebleness though, is a good sign.   I’m deliberately headed toward the state’s darkest place – Kissimmee Prairie Preserve State Park (KPPSP).   When I arrive, two hours before sunrise, the gate is closed.   An expected obstacle.   The park doesn’t open until 8:00 but surmised that even at its gate the stars would be magnificent.   The early arrival was just the first of three things to have lined up perfectly.   Today is also a new moon, meaning it’s just a sliver of distracting light in the sky, plus there is not a single cloud to be found, awarding ideal stargazing conditions.   I hop onto the trunk of my rental car, lean back, and there it is – the Milky Way.   Someth
1 comment
Read more
More posts
Please Help Support
The Nature Conservancy
Click to Give

Tim Koppenhaver
A few hours outdoors in nature has been my antidote to a life otherwise spent indoors. Follow along as I document the antidote I've found at Nature Conservancy properties around the country.